Some of the articles that have featured the D.C. Creative Writing Workshop

The National Inventory of Humanities Organizations, a project of the American Academy of Arts and Sciences, featured the D.C. Creative Writing Workshop on the NIHO webpage during April-May 2019.

Poems by students of the D.C. Creative Writing Workshop published in Capital Cadences, presented by the Junior League of Washington, April 2, 2015.

“Is poetry dead? Or, in the age of the Internet, does it offer us what nothing else can?” by Lauren Wilcox, Washington Post Magazine, January 15, 2012

“For the Love Of Ballou: 2 Scholar-Athletes Made a Private Pact: To Nurture Hope at a Troubled School” by V. Dion Haynes, Washington Post, June 23, 2006

“Student Poets Reach Within” by Judith Havemann, Washington Post, May 20, 2004

“Poetry at 30 Paces; In Competition With the Pros, Young Versifiers Show Their Rhyme Has Come” by Lonnae O’Neal Parker, Washington Post, May 17, 1999

“Ode and Young; At Workshop, Students Discover Poetry and Themselves” by Jacqueline Trescott, Washington Post, May 19, 1996

The Washington Post’s KidsPost page held a nationwide contest for the ten best student poems of the year. Sixth grader Gerome Wood won and his poem “Yes!” was published in the newspaper on April 26. Here’s a hyperlink to the online edition. 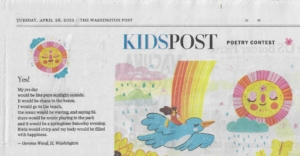 “Showing kids their possibilities…developing a roster of future literary stars…if only there were more programs in public schools designed to help kids find their niche.”